LED displays are everywhere. From the streetlight outside of your house to the LED screen installed outside of a mall, you can never escape LEDs. They have also evolved with time. Conventional LEDs are now no longer the preference of the market. With a wide range of better and more progressive LEDs, traditional models are losing their charm. GOB LED Display and COB LED display are some of such new technologies. 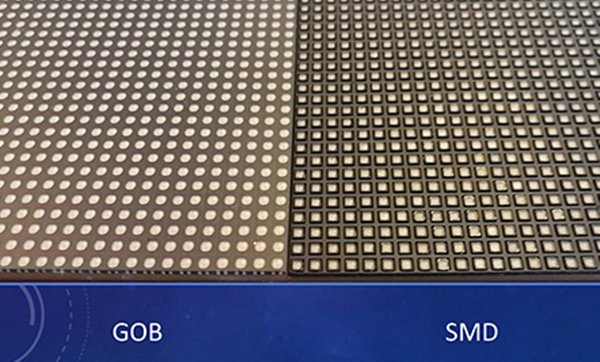 What is Gob Led Display

Gob Led Display is an LED Display with a glue on board (GOB) technology. This innovative technology seals the module surface with transparent epoxy glue. This protects the LED from any harmful accidents by making it anti-collision, waterproof, anti-UV and dust proof. The lifespan of these LEDs is also extended due to heat dissipation caused by shield glue.

GOB technology also protects the LED from breaking as a result of any sudden accidents such as dropping it during installation or delivery. Since it’s shock proof, all such accidents don’t cause breakage. This technology allows ultra high transparency performance along with ultra high thermal conductivity.

This technology is also much simpler to maintain in comparison with other similar technologies. Not only does it cost less but it is also long lasting. It’s highly adaptable and can be used in any environment regardless of the weather conditions. Though GOB has not become mainstream until now but because of its risk reducing features like anti-knock, it will certainly become more common in future since it’s a necessity for displays that need LED diode protection.

Some of the pros of GOB LED Display are,

GOB technology makes LED displays shock proof due to which any harm caused by any external harshness is prevented. Any chance of breakage during installation or deliverability is highly reduced.

Since the Glue protects the display, LEDs with GOB technology do not have any cracks caused by knocking. The barrier created by the glue prevents screen damage.

Often dropping during assembly, delivery or installation results in collision. GOB has largely reduced this risk of collision through its protective glue sealing.

The glue on board technology protects the LED display from the dust. This dust proof nature of the GOB LEDs maintains the quality of the LED.

Water is an enemy of all technology. But GOB LEDs are designed to be waterproof. In case of any encounter with rain, or any moisture, the glue on board technology prevents the water from getting in the LED and as a result protects it.

GOB LEDs are highly reliable. Since they are designed to be safe from most risks such as breakage, moisture or any shock, they last a long while.

Some of the Cons of GOB LED Display are

One of the cons of GOB technology is that it makes the LEDs difficult to repair. Though it reduces the risk of any collisions and knocks by its glue, the glue unfortunately makes the process of repairing the LED hard.

The glue is colloid onto the screen with high stress. Due to this, PCB boards can be deformed which can then cause the screen flatness to be affected.

With thermal alteration of hot and cold repeatedly, there is risk of colloid discoloration and partial degumming.

The colloid covers the luminous surface of the LED Display. This creates a secondary optical image and may cause problems in viewing the effects.

In case of a false welding, the GOB LED Displays are highly difficult to repair.

Some LEDs are more prone to damage than others. For such LED displays, GOB technology is essential. It prevents any damage and saves you a lot of money.

Some of the LED displays that need GOB technology are,

Rental LEDs move a lot. They frequently go through the assembly, installation, disassembly, packaging and delivery process. Due to this, these LEDs are often damaged during one of such processes. This increases the maintenance cost since they need frequent repair. With GOB technology however, Rental LEDs are well protected and safe.

As the PCB of transparent LEDs is narrow, the LED and PCB are prone to damage. These LEDs are really popular these days but since they are easily damaged, it can often affect the resolution and transparency of the display. Glue on board (GOB) technology ensures that the LED display remains safe and secure from any collision or damage.

Small pitch LED display has a pixel pitch of less than 2.5mm. Since the pitch is this small, the damage is inevitable. It can be damaged with even a little force. The maintenance is also very difficult and costly. GOB technology solves this problem by protecting the screen which prevents any chances of damage that are otherwise possible.

Since Flexible LEds use soft modules, the GOB technology can increase the reliability of Flexible LEDs by protecting them from moisture damage, and scratches.

Conventionally, Floor LEDs use an acrylic layer to protect the screen. This can affect the visuals and light transmission. With the GOB technology, this issue can be prevented. Not only can GOB offer better light transmission and visual effects but also offers waterproof, shockproof and dustproof technology so even if someone steps on it, it’s still protected.

Irregular shaped LEDs are often used at indoor public places such as clubs and halls LED spherical screens etc. Due to this, spilling drinks and exerting accidental pressure on it is inevitable. Glue on board (GOB) technology protects the LED display from any damage caused by stress of spills. It can largely reduce the maintenance cost too.

What is Cob Led Display

Chip on Board also known as COB LED displays are LEDs formed by multiple tiny chips bonded to the substrate creating a single module. These LEDs are not traditionally packaged and take up less space than conventional ones. This technology  also reduces the heat generated by the chips and as a result solves the problem of heat dissipation.

These LEDs offer wide viewing angle and less light loss because of the fact that these additional packaging or lenses are not used in conventional models.

Pros
Some of the pros of COB LED Display are,

Some of the cons of COB LED Display are

Some of the applications of COB Technology are,

Choosing the correct LED is not an easy decision. There are many different LEDs in the market and GOB LED Display and COB LED display are in competition right now. You can only make the correct decision once you are well informed. Make sure to do your research to find which ones are the best for you.