What is naked-eye 3D? How to make a 3D LED Display?

This new technology does not make it more appealing to the general public but also increases the brand value. Though it’s fairly new and has not yet become mainstream, it seems like it will outperform other LED and LCD technologies that have been used previously. In large scale displays, such as 3D LED video walls, advertising holograms or projection systems, 3D Led displays would certainly shift the paradigm of visual tech.

What is a naked-eye 3D LED display?

Naked-Eye 3D LED Display are three dimensional displays that do not require any glasses or extra equipment to view the 3D image. Viewers can see the three-dimensional image with their naked eyes without needing to wear glasses. Unlike Naked-Eye and Holograms, VR and AR need extra equipment as like to make mandalorian virtual set.

Naked-Eye 3D LED Display is designed with multi-view technology. Which means that a person can view the 3D image regardless of where he stands. As of now, some of the types of 3D LED Display are grating type, holographic projection type, cylindrical lens type, time-sharing multiplexing type, volume type, etc.

Parallax Barrier is one of the two types of technology used in Naked-Eye 3D LED Display. This type uses linear stripes which are distributed between light and black to control the direction to which the light travels. This causes the image to produce a parallax effect. The second type of Naked-Eye 3D LED Display technology is Lenticular lens. These displays use light refraction and focus of lenticular lenses to change the direction to which the light travels. These two technologies are best suited for small scale LED displays since the resolution is split and brightness is reduced.

The older LEDs are flat surfaced. They are designed to run the 2D content. For this reason, even if the content is produced in 3D tech, it will still not produce a three dimensional effect on 2D LEDs. They are placed at a 90 degree angle to run the two dimensional content. The light is emitted in two dimensions only. 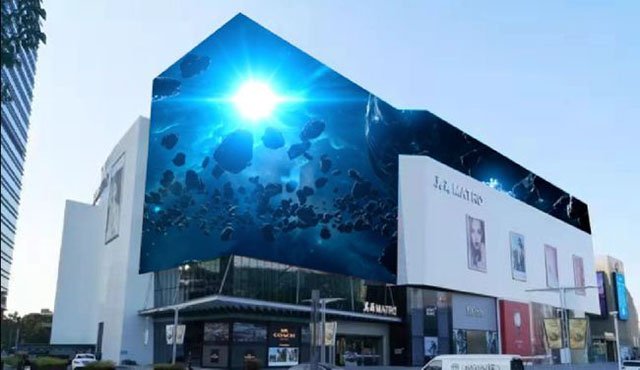 3D LEDs are slowly starting to become mainstream all over the world. Not only are 3D LEDs much more appealing to masses than 2D ones but also are amazing for building brands and for advertising. With 3D displays, it becomes easier for the public to connect with the content being screened on the LED. People are also more likely to get attracted and pay attention to it.

In the future, Naked-eye 3D LED technology can be used in combination with other 3D technologies to produce a unique effect. Investing in higher definition images and working with animators and artists to produce engaging 3D content would certainly boost up the 3D LED market.

It is unlikely that 3D LED displays won’t be mainstream in future. They’re more interactive than 2D Displays. However, due to the fact that demand is low right now as it’s not mainstream, small scale industries are not ready to invest in it. Yet the market for 3D LED displays appears very bright in the future as new technologies are introduced and demand is increased.

How to make a 3D LED Display?

3D LED Displays are the future of advertising. They are the epitome of strong visual communication and are more visually pleasing to the public. They are also better than previous advertising forms such as billboard advertisements, posters, 2D LEDs etc. But how do you make a 3D LED Display? Here are the four ways:

It can transform the building into a landmark combining art and technology.

One of the best ideas to create a successful 3D LED Display is to combine art with technology. By using creative abilities to display an artistic masterpiece on buildings, you can attract a lot of people, especially tourists. A perfect blend of art and technology would transform the building it’s displayed on into a landmark.

LED displays have been used for advertising throughout the years. But using it to communicate your brand’s message will help you in creating brand value and the audience will be able to connect with your brand image more.

Public loves when new technology becomes mainstream. When you will lead the new technology and use it to communicate visually with the audience, the masses will start viewing the display as a monument rather than an advertisement.

As human beings, we love beauty. Don’t let your LED display become just another advertising method for the public. Instead, use it to give the public a visual experience by taking aesthetics into account and creating visually appealing 3D content.

LEDs that don’t have enough pixels don’t really create rich details. This is an issue that 3D LED displays shouldn’t have. Outdoor LEDs with a big number of pixels are the best to achieve the naked-eye three-dimensional effect on the LED display.

3D LED Displays offer a rich visual experience. Contrast, HDR and gray scale ranges are essentially important to achieve the highest quality of 3D content displayed on the screen. For this reason, 3D LEDs should have high contrast, and high dynamic ranges to create the clarity and depth in the content displayed.

Outdoor 3D LEDs are placed in commercial public places. These outdoor LEDs should have better viewing ranges so that regardless of the angle, or the distance they are standing at, they should be able to view the 3D video content. The arc shaped and large displays are best for this purpose.

When buying a 3D LED, you should consider where you’re going to install it. Not all buildings can handle heavy LED Displays. The best bet is installing the lightweight LED. Not only will it perform with stability but will also be easier to maintain.

Outdoor LEDs witness a lot of weather. A good LED display should be water resistant, anti-corrosion and dust proof. LEDs should be able to withstand all weather conditions such as rain, storms and snow without losing any element in performance.

Though the LED itself plays a big role in its success, video content is the most important thing to consider. The content being displayed should be visually pleasing and should have unique effects to turn LED viewing into an exceptional visual experience.

LEDs consume power. Since the LEDs would be working 24/7, you should consider how much power it’s going to use. Big LEDs are going to have a huge impact on your budget overall due to power consumption so you should only invest in big LEDs for large scale businesses.

3D LED Displays offer an appealing visual experience to the pedestrian. The trends are changing and big scale businesses are shifting from conventional methods to other methods such as 3D LED video wall. Naked-eye 3D LED is the commonly used 3D effect since it does not require extra equipment to experience the three-dimensional content. 3D is the future.