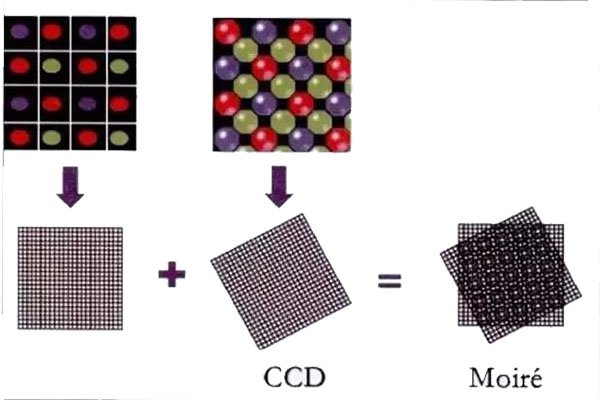 We live in a world of aesthetics. These days, everybody is capturing pictures and posting them on social media. We also encounter LED displays all around us. Especially in advertisements, LEDs perform very well. With all this, it’s impossible not to come across the rainbow-like pattern in pictures and on LEDs. This pattern is called the Moire Pattern.

These patterns ruin the image quality. It’s one of the biggest challenges that photographers face. Since it’s difficult to remove the Moire fringes after post production, most of the techniques are applied during production to prevent it. Soft images with less details have less chances of Moire fringes. The sharper the image, the higher the chance of Moire.

In this article, we will explore what is the Moire Pattern, how it is formed and how you can prevent the Moire ruining your LED Display.

What is the Moire Pattern?

Moire Pattern is a visual phenomenon that involves repetitive details such as lines, dots and colours in an image. At times, it can be used deliberately to produce a special effect but most of the time, it occurs as a fault. This can affect the quality of the image captured.

To explain it further, Moire fringes are interference patterns that occur as a result of overlap of an opaque pattern having transparent gaps with another pattern that is similar but different. These interferences are also known as Moire fringes. These fringes are often more visible when shirts and jackets with a specific pattern are being captured. You might have seen it on your TV too.

Since it’s unpleasant and ruins the quality of the image, it’s best to avoid these patterns at all cost. They ruin the viewing experience and take away from the content being displayed on the LED.

How is Moire Pattern formed

Moire Pattern is formed by the overlap of two patterns against each other. In simpler words, when an opaque pattern overlaps with another pattern, the Moire effect is produced. This occurs when the pattern captured is exceeding the resolution of the camera. For this reason, cameras with higher resolution would reduce the chances of Moire fringes being formed.

The similar pattern in both the object and the imaging chip results in a third pattern called Moire. Anti aliasing filters are used to reduce this effect but this results in a softer image. Sharper images have more chances of Moire. This is why, the cameras that are designed to produce sharp images, result in Moire fringes more often than not.

How does the Moire Pattern effect LED display?

LED Display is designed to give you a good viewing experience. Nothing gives more pleasure than watching an image or a video on screen with beautiful aesthetics. This aesthetics are ruined when a distortion or an error occurs in the content. Moire fringes are one of such distortions that ruin the image.

When Moire is noticeable, it often results in an unpleasant viewing experience. The original beauty of the visuals is ruined. This effect often occurs when a jacket or a certain clothing with weaving patterns is being captured. If the patterns are denser than the resolution of the sensor, it results in a LED Display Moire pattern.

Due to this, anchors and broadcasters often wear clothes that would not result in the Moire. It’s even more noticeable when such objects are being moved. The image result in such cases is not good. Especially in professional scenarios, the Moire effect risks the reputation of the broadcasters and photographers.

Even if it is eliminated by softening the image, the overall image quality is not the best with such editing. Softening the image can eliminate some of the details of the image. There are other ways that help in eliminating the Moire during and after production.

How to reduce Moire Pattern of LED Display

Seeing the Moire pattern on your LED Display is not pleasant at all. It ruins the viewing experience and makes the visuals unappealing. Eliminating it is not easy but it’s definitely possible to reduce it largely. The solution involves working on two different aspects. One from reducing moire during the capturing and secondly from the LED display itself.

It’s very difficult to eliminate the Moire after production. Though it is possible, the best way to eliminate LED Display Moire patterns from forming on LED is to avoid it when shooting. Most of the causes of Moire actually occur during production so solving it when capturing it reduces the risk of Moire largely.

Some of the ways to reduce Moire during production are,

Moire is caused by the overlap of two contrasting patterns. When Moire is forming at a certain angle, it means that the angle is causing the patterns to overlap. The best way to fix this issue is by changing or adjusting the angle of the camera. Most of the more issues will be fixed by this adjustment.

Most of the Moire can be simply solved by adjusting the focal length of the camera. When you change the focal length, it adjusts the resolution of the image. This reduces the chance of Moire patterns forming by a great number. Another alternative to this is, changing the distance.

If the Moire patterns are forming, that means two patterns are overlapping. This can be solved by changing the focus. Change the focus from where the patterns are, this will eliminate the overlap and eventually remove the Moire effect. If it’s necessary to focus at the site of patterns, just adjust it around a bit and focus on an area around the patterns.

If you adjust the shutter speed, and lower it a bit, it will help you make up for the low refresh rate of the LED Display. This will help you in lowering the horizontal bar from the display.

If other methods don’t work, go for Anti-Aliasing Filter. With this filter, the repetitive patterns will be blurred softly, which will reduce or eliminate the Moire Filter produced by the overlapping of similar patterns. However, you need to keep in mind that this may reduce the overall quality of your image.

Despite all the techniques and prevention methods, sometimes it’s inevitable to eliminate Moire during production. This can be solved by editing the footage or the image after the production. This works especially well in the mild cases. However, even in more severe cases, the post production editing can reduce the Moire patterns to a great extent.

There are instances when Moire is not caused during production but is caused by the LED Display. Due to Moire the viewing experience is ruined as a result of bad image quality. There are many technologies these days that reduce the problem of Moire effect forming on the screen. Some of such technologies are,

With Optically processed large LED screens, the more interference can be largely eliminated. Many manufacturers around the world have great expertise in this technology. In this technology, optical processing curtains are fixed near the light eliminated tube of LED. The screens with this technology only use specific light absorbing materials and lenses to work well with TV cameras.

This technology also prevents the image from distorting regardless of how close the lens is. The moire effect can be eliminated well with this technology.

These days, some companies offer ultra fine COB display modules. Since these modules have a smaller pitch, the distance of the moire effect is reduced. Due to this, the shooting distance is not a problem. This can reduce the LED Display moire patterns.

The rainbow-like pattern that you witness in your pictures and on your TV screens is the Moire Pattern. It’s one of the biggest challenges to photographers. It’s even a greater challenge for the viewer since it ruins the visual experience. However, there are techniques that we can use to eliminate or at least reduce the Moire effect on our images and LED Display.